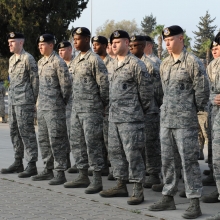 The Pentagon last week released its latest policy memo on transgender military service, an effort to bring President Trump’s tweeted ban in line with court rulings that had blocked the administration from implementing it. There are numerous problems with the policy, but one, in particular, ought to bring the entire edifice tumbling down: It is based on the wholly deceptive claim that allowing transgender individuals to serve would mean giving them “special accommodations” — a reprise of the religious right’s strategy of opposing gay rights by calling equal rights “special rights.”

In reality, it is the Trump policy that imposes a separate standard. The previous policy — the one that has successfully allowed open transgender service for the last three years — genuinely applied the same standard to all troops.

In testimony before a congressional committee in February, James Stewart, the Pentagon’s top personnel official, laid out the administration’s case for the ban, which, with rare exceptions, prevents individuals from serving in the U.S. armed forces if they are diagnosed with gender dysphoria and a need to transition from one gender to another. The inclusive policy from the Obama era, Stewart argued, treats transgender people differently from other troops by allowing them to “opt out of the sex-based standards associated with their biological sex.” Such “exemptions,” he said, undermine the sense of fairness and uniformity that’s critical to readiness and cohesion. The new policy simply ends the “special accommodations” and ensures “equal application of military standards to all persons regardless of gender identity.”

The Pentagon memo spells out how the policy works in more detail: Anyone diagnosed with gender dysphoria (except for service members “grandfathered” under the previous policy) will be denied entry or will be discharged unless he or she is “willing and able to adhere to all applicable standards, including the standards associated with his or her biological sex.” In other words, gender dysphoric people can serve only if they decline to transition, even when doing so is considered medically necessary.

Because the policy doesn’t prevent those who identify as transgender from serving, the Pentagon is trying to claim that it is not a transgender ban. The trouble with this claim is that the Pentagon wrote the standard specifically to target transgender people. By adding the requirement that everyone must adhere to the standards of their biological sex, it has made transgender people, alone, unable to qualify. It’s a reflection of the Trump administration’s commitment to transgender erasure, which insists that a trans man is not actually a man, and a trans woman is not actually a woman.

The Pentagon’s policy is like a decree from the Red Queen in “Alice in Wonderland.” Everyone, even those who are transgender, must behave as though they are not transgender, and only in such an upside-down world could the military call this an “equal application” of standards. This is a lot like saying that barring attendance at Mass is not a ban on Catholics. After all, everyone, Catholic or not, would be equally banned from Mass.

The Trump administration has the double-standard issue exactly backward. It is not the inclusive policy that treats transgender and non-transgender troops differently, but the new rule. To see this clearly, consider how it deals with individuals who need identical medical treatment but have different gender identities. Under the new policy, a woman who needs hormone treatments may enlist in the military unless she’s a transgender woman taking hormones as part of her medically necessary treatment for gender transition. A woman who has had breast reduction surgery may be qualified to serve but a transgender man who has had breast reduction surgery is banned.

Targeting transition-related medical care as disqualifying could make sense if that care posed genuine risks to troops’ ability to do their jobs. Yet medical and military experts across the board have said that’s not the case. The American Medical Assn. and several other major medical groups say “there is no medically valid reason” to ban transgender troops from service; six former surgeons general released a statement repudiating the ban, saying “transgender troops are as medically fit as their non-transgender peers and that there is no medically valid reason — including a diagnosis of gender dysphoria — to exclude them from military service.” All five military service chiefs have testified that transgender inclusion has caused no problems with cohesion or readiness. And five military professors said in a statement that Pentagon officials “misled Congress” when they asserted that allowing transgender service meant giving transgender troops “special accommodations.”

Suitability for military service rests on whether someone is fit for deployment. According to the Pentagon’s own figures, transgender troops — including those with a history of gender dysphoria and gender transition — are fully fit. Nearly 400 service members diagnosed with gender dysphoria have deployed to the Middle East, and since the open-service policy went into effect in 2016, only one could not complete deployment for mental health reasons. Transgender troops do not need their own set of standards when they are already subject to — and easily meeting — the same standards applied to everyone else.

Transgender troops — and those wishing to serve — are asking only for equal treatment. When the administration effectively bans them from service instead, it should at least be honest about it.

Nathaniel Frank is a senior research consultant at the Palm Center, a San Francisco think tank.