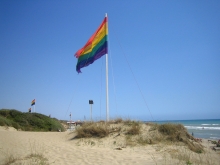 New York (CNN) — The first generation of lesbian, gay and all manner of gender-dissident New Yorkers who flocked to the tiny spit of land named Cherry Grove came largely from the city's bohemian theater and arts world.

Here, just 60 miles east of Manhattan, this despised and misunderstood community built a utopian outpost where they could not only be themselves, but could create a model culture -- one of expressive freedom, chosen communities and pleasure-seeking -- that the rest of the world would soon emulate.

For decades, this and a smattering of other LGBTQ sanctuaries countable on one hand were indispensable safe havens for those lucky enough to reach them. In few spots on Earth could same-sex couples stroll on sidewalks hand-in-hand without serious risk of arrest or even violence.

Being outed could mean public humiliation, job loss, family rejection and worse. And an unholy alliance of police raids and vigilante "justice" served to enforce the seldom-challenged collective will.

This year's WorldPride, the first to be held in the United States, commemorates the 50th anniversary of resistance to one such police raid, at the Stonewall Inn in Greenwich Village, a spontaneous uprising that sparked a new chapter in LGBTQ confidence and -- not unrelatedly -- demands for equal dignity and equal rights.

Indebted to the successes of that movement, which created new worlds for folks gay, straight and everything in between, we all have much to celebrate as we mull our Pride plans, whether in our own backyards or many continents away.

As in the past, we have hit speed bumps on the road to progress, some of them swelling to alarming hurdles.

As part of a worldwide backlash to equality, more than a hundred anti-LGBTQ bills were introduced over the last year in 29 US states seeking to reverse progress on marriage equality, transgender rights and the basic principle of equal accommodation.

In 30 states, LGBTQ people can now get married on Sunday and be fired or denied service on Monday just for being themselves. Violence and physical threats have ticked up at disturbing rates, and appallingly repressive laws and practices have swept through countries from Africa to Europe to Asia.

And yet the stunning cultural and legal changes propelled by intrepid LGBTQ advocates over the last half century have left more and more corners of our globe brighter, more welcoming, and more loving than before.

The beauty, isolation, and inclusivity that first made places like Fire Island such seductive escapes for LGBTQ adventurers have, with the help of a changing culture, transformed these meccas into global hotspots treasured by travelers the world over.

So today, whether you're an LGBTQ bohemian or just a closet adventurer, whether you're traveling solo, with kids, or with what Armistead Maupin calls your "logical family," there are countless options for escaping to gorgeous locales somewhere over the rainbow, beckoning with beauty, belonging, and love. Happy Pride!